So you said "I Do," the vows, the weather, the honeymoon, everything was beautiful.  But what does this mean for your taxes? Your mind may be a long way from thinking about how this affects you financially, BUT with the Tax Cuts and Jobs Act (TCJA) passed in December 2017, there are definitely a few things to consider regarding your future taxes and filing status as newlyweds.  There are some real benefits along with a few drawbacks of getting married (from a tax standpoint!), and how your filing status can affect your tax bill.

The “marriage penalty” is a phrase that’s been commonly used to describe the scenario in which married couples have to pay more taxes when filing jointly rather than filing as two singles.  Before the TCJA, more couples were prone to the “marriage penalty,” namely due to the tax bracket structure. For example, if two individuals each with an income of $90,000 filed separately, they may land in the 25-percent tax bracket. But should they get married and file jointly with a combined income of $180,000, they would exceed the 25-percent tax bracket for married couples and be  pushed into a higher bracket therefore requiring a them to pay 28% in taxes on the last dollars they earned. 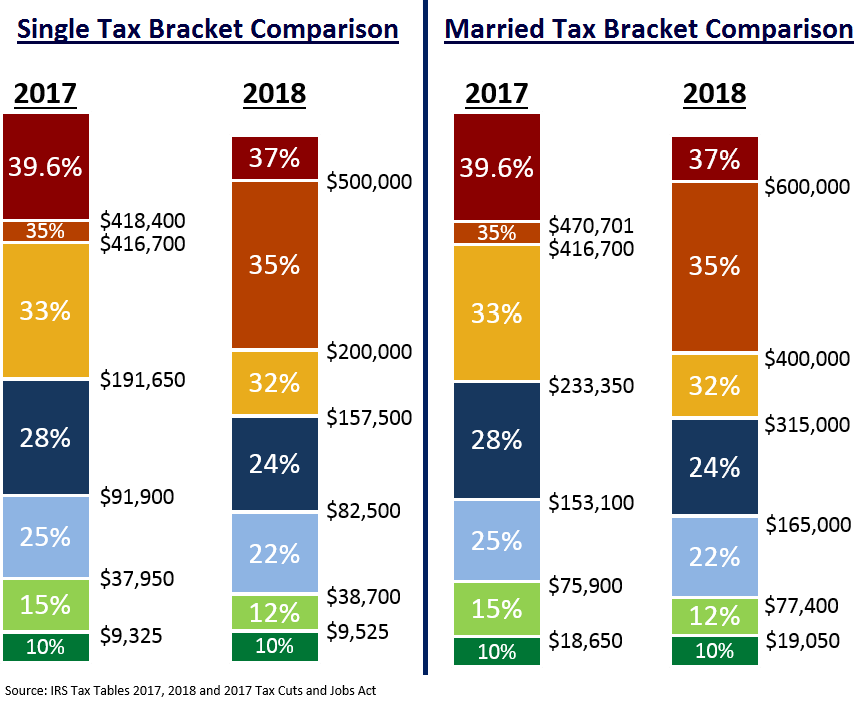 Con: The “Marriage Penalty” Still Exists For Some

While the TCJA may have reduced the  effects of the “marriage penalty” on many middle class couples, it has not been eliminated completely. With the new tax bracket adjustments,  the existence of a “marriage penalty” still exist's for higher income earners. As you will see below, getting into higher tax brackets may have an adverse effect from a tax standpoint. Additionally, certain deductions and tax credits that some may be eligible for as individuals, may not be available when filing jointly.

As we mentioned in the first pro, the TCJA has adjusted the tax bracket ranges to reduce the “marriage penalty.” This means that spouses earning a combined total of $400,000 or less are in the same tax bracket as they would be if they were filing separately, say as two individuals earning $200,000 a year. Each tax bracket, up through the 32-percent bracket, exactly doubles the limit from filing individually to filing jointly.1

The 35-percent bracket is roughly:

The 37-percent bracket is roughly:

Of course, $600,000 isn’t even close to double $500,000, meaning high earning married couples could be facing the “marriage penalty” by filing together.

There are certain tax credits and deductions offered only (or at a higher amount) to those who choose to file jointly. Some of these include:

Although, with the TCJA raising the standard deduction rate for those filing jointly from $13,000 to $24,000, some couples may find that the need for itemizing their deductions is no longer necessary, even though it may have been in previous tax years.2

When you and your spouse file jointly, both parties are legally liable and responsible for any tax owed, penalties or interest.3 This includes couples who filed jointly and later divorced as well as couples in which one spouse earns all the income. If you are worried your spouse may be attempting to evade taxes or claim less than they should, it’s important to understand that you could be held responsible or liable if you filed jointly.

You’ve likely heard that getting married can mean big tax breaks in your future, but the truth is it’s important to do your math and research carefully before filing. This can help you and your spouse understand all of the latest tax law’s pros and cons to filing jointly or separately. And if you’re still unsure or have recently tied the knot, it may not be a bad idea to check in with your CPA or financial planner to thoroughly evaluate all of your options.