If you are like most Americans, you likely don't consider contributing to your employer-sponsored retirement plan as a gamble. Many Americans think about investing in their Retirement accounts such as a 401(k), 403(b), 457, Traditional IRA, or even their Pension as a relatively safe bet. Sure, the stock market will fluctuate, but most people believe the market will be higher when they retire compared to where it was when they started saving. From a historical perspective, they are correct, the market has always appreciated over long-term periods - But the taxation of these accounts can start to sing a very different tune.

Nothing in life is perfect and along those same lines, there is no such thing as a perfect investment.  With every investment, there is a trade-off and the trade-offs show their face immediately. For instance, if you are investing in your company sponsored 401(k) plan, you are receiving an up-front tax deduction and years of tax-deferred growth, but you are also agreeing to pay the full taxation of those assets later on in life when you begin to withdraw them from the account. Basically, you are building a tax-time bomb that potentially blow up in retirement.

That right there is the gamble. You are betting that your current tax rate is higher than it will be when you retire and that is something most of us were taught.

The only way to win this bet is if your tax rate - both State and Federal combined - are lower than they are on the day you took your deduction. That also includes all beneficiaries you leave your retirement accounts to after you pass. If they are forced to withdraw the funds during high earning years, you would lose that bet.

Imagine you were starting a business and you decided to take on a partner. The first thing you do is draw up a partnership agreement. Let us just say it's a 70/30 partnership.  You own 70% of the company and your partner owns 30% and that makes sense because you are going to run the day-to-day operations and make all the decisions.

But what if there was a clause in the agreement stating, that your partner could increase their ownership of the company at any time without your consent? Would you sign that deal?

Well, that is exactly what the State and Federal Governments have done. When you invest in your Retirement account using pre-tax money, you have agreed to start a partnership with the government. And here is where the problem begins, the government can change the terms of that partnership at any time. If they want to own more of your account, they just change the tax rates and voila! Uncle Sam now owns a larger piece of your Retirement and there is nothing you can do about it.

So, if you have a pre-tax retirement account, you own a part of it and the government owns a part of it.  If your account balance is $100k, and your current effective tax rate is 20%, effectively the government owns $20k of your account. As I mentioned earlier, they can decide to raise taxes at any point and own more of your dollars in that account, maybe 30%, 40%, 50%, or more!

Additionally, the government will own the same portion of all account growth.  If your account grew from $100,000 to $200,000, the government's same 20% portion would go from $20k to $40k. This sounds like a great plan for the government, they could change the rules at any time or do nothing and realize a larger dollar amount due to the growth in your account value.

At the end of 2019, prior to the COVID-19 Pandemic, the United States Federal Government was already running a deficit of $985 Billion a year and had a total debt of $22.8 Trillion  - That's TRILLION with a T.1 In 2021, after the Coronavirus Pandemic that has ravaged many of the world’s economies, the projected U.S. Federal Deficit was $2 Trillion which was largely a result of continued spending in reaction to the pandemic along with various social programs.2 Currently, the National Debt is over $30 Trillion.3

This is such a tremendous problem that we are facing as Americans, former United States Comptroller David M. Walker wrote a book about this dire situation.  In his book, "Comeback America, Turning the Country Around and Restoring Fiscal Responsibility" he argues that we will need to raise taxes to avoid going bankrupt as a country. Not only does he argue tax rates will have to go up, but more likely must DOUBLE. And he is not talking about some date way out in the unimaginable future. Walker thinks this will happen by 2030. We believe this has been accelerated due to the COVID-19 pandemic.

The first is to reduce spending, but due to the fact that approximately half of our government's spending goes towards programs like Medicare and Social Security coupled with the fact that retirees and pre-retirees make up the majority of our voting public, that's just not a viable option in our opinion. How could a politician, who needs to continuously be re-elected, seriously consider cutting spending on programs that affect the largest voting base in the country - and then expect to get re-elected?

That only leaves raising taxes. There are three main areas where the federal government can look to increase taxes. The first is Income Taxes, the second is Estate and Gift Taxes, and then a third category we call other taxes.

The easiest option for the government to raise revenues and begin paying off the national debt is with the Income Tax. As mentioned earlier, many of the world's foremost economists, believe tax rates will have to double. This has put you, and every working American, in a position where you now have to make the decision to pay taxes today and lock in your current tax rate or defer your taxes to a later date and hope rates are lower than they are today.

This decision is not one that should be taken lightly. Nobody has a crystal ball to look into the future and say "YES - the tax rates are going to be higher beginning on a specific date and therefore we should do X, Y, and Z today."  But we do have history to use as a guide. Using the chart below, if we look back at history, we can see our current tax environment is really close to historical lows, even for those earning the highest incomes. The table shows the highest tax brackets, dating back to 1917.

The other piece to our current tax environment is that the current rates have what we call a "sunset clause" meaning: the tax rates will revert back to the old tax rates from before the Tax Cuts and Jobs Act of 2017 (TCJA), commonly known as the "Trump Tax Cuts." Below is a chart showing the income thresholds as well as the actual brackets. As you can see, the actual brackets are now lower since the beginning of 2018 (except 10%) and the income thresholds to get into those brackets are much higher. As you can see, this tax cut was not just for the rich, in fact, it has positively affected every tax bracket. The last takeaway from the chart below is that these rates are temporary. If there are no changes made to the tax code, tax rates will indeed go up on January 1, 2026. 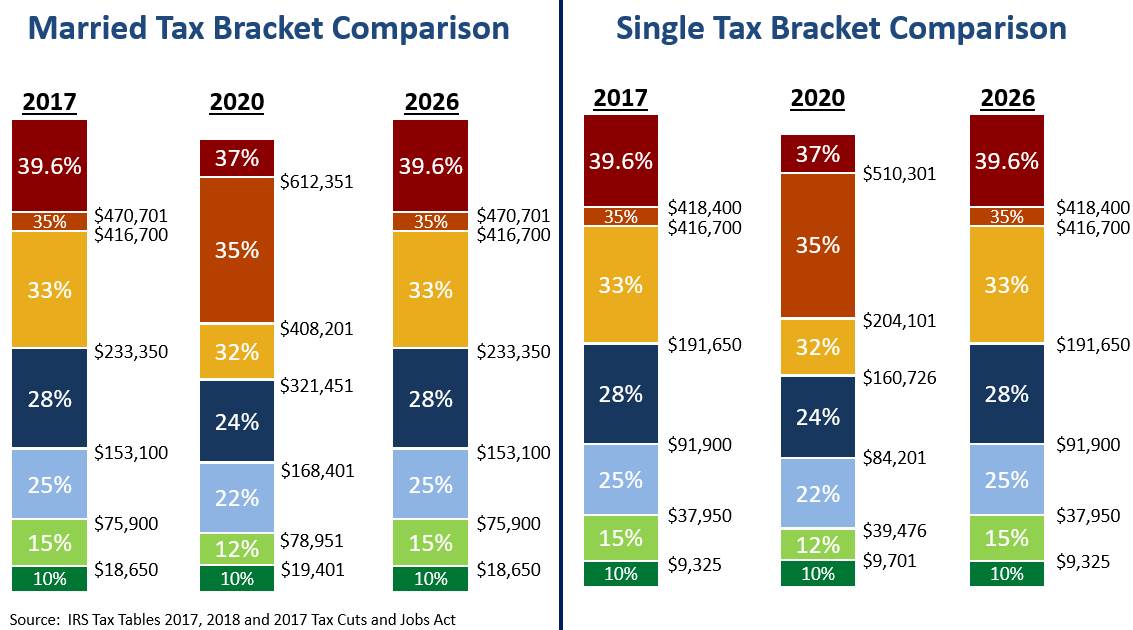 This creates a massive opportunity for every American saving for their retirement. For the first time in history, we know the exact day that tax rates will move higher.  So here is how we are approaching it, TAXES ARE ON SALE! They were higher prior to the TCJA and will be higher again in 2026. When you couple that with the massive national debt, where do you think taxes will be during the next 10, 20, or 50 years? We can't say for sure, but we believe due to the fact that taxes are near historical lows coupled with the unprecedented national debt AND the federal government’s need to raise revenue, taxes will most likely be higher - possibly much higher.

Start building out your assets utilizing different account types to both accumulate and distribute your wealth. To accomplish this, we first have to understand "The Order of Money" which is how we categorize different types of accounts based on the current tax environment. The key point of emphasis here is that not all money is taxed the same. Some account types get preferential treatment in the tax code.  Then, we use the Order of Money to fill out our "Tax Efficient Funnels." You can see the concept illustrated below. 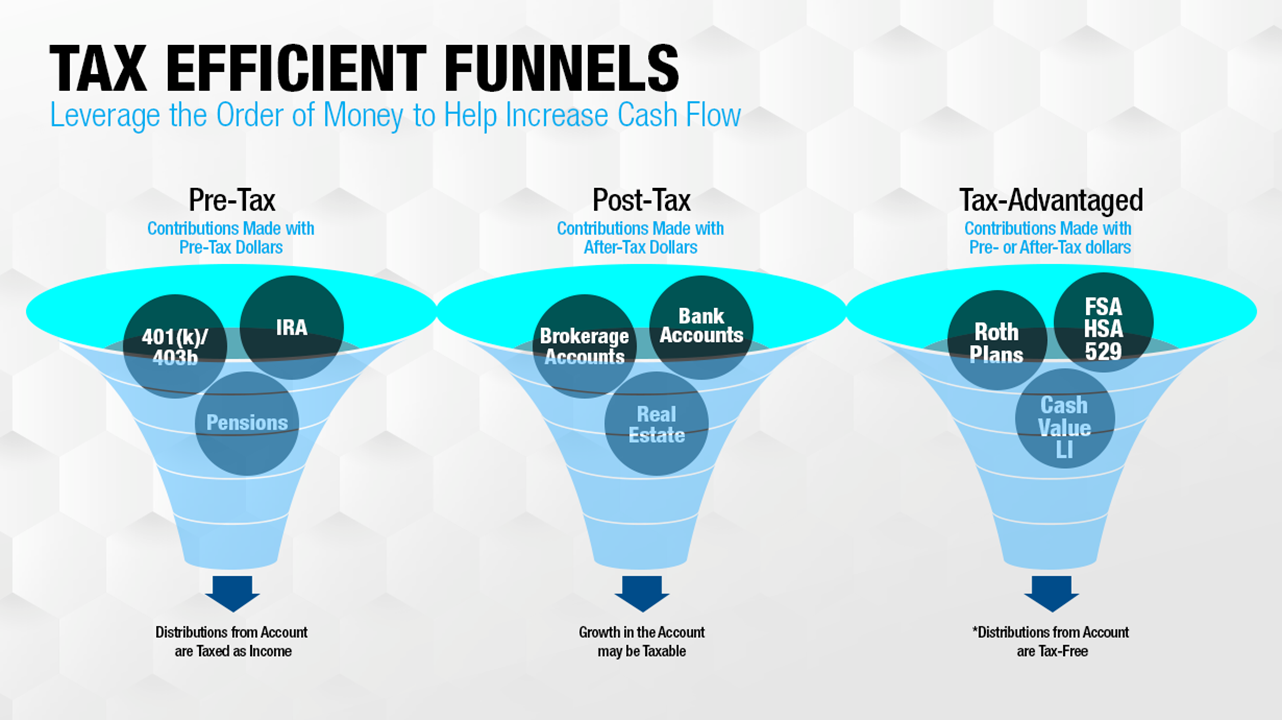 Now that we have organized your Tax Efficient Funnels, we will use them to begin filling the buckets in your Bucket Plan! This is not a one size fits all process, the specific steps you should take are 100% dependent on your own specific situation, things like: How much income you are earning, how much you have saved, any changes in the tax code, where you derive your income from, among others. The idea is to create the most efficient plan possible. Taking these steps now and ahead of retirement will allow you to decide once you ARE retired – when you are taxed and how much you are taxed.

In retirement, the tax game completely changes. Creating flexibility now will go a long way toward eliminating many of the avoidable taxes in retirement and may ultimately be the difference between running out of money and having your assets last as long as you do.

If you would like to discuss your current situation schedule a free 20-minute call with the link below.